Certainly not the blog post I planned on writing after spending two weeks in New Delhi, India but I am compelled.

Today, McDonald’s hosted a Twitter chat with VP of CSR Bob Langert. The motivations are many for a company that is besieged for its product line and constantly under fire.

In fact, last year at a diversity benchmarking event at Hamburger University, I had the opportunity to hear the McDonald’s executive team discuss a whole host of business practices and strategies, including diversity (led by Global Chief Diversity Officer Pat Harris), employee learning and corporate social responsibility (CSR).

Here’s a snapshot of what I wrote then:

There is an argument that some companies–such as those that deal in weapons and tobacco–just can’t do corporate responsibility in a meaningful way. As a result, they are often excluded from CSR rankings and benchmarking exercises.

But what about a company like McDonald’s constantly under fire for its products? How does the world’s largest fast-food chain practice corporate social responsibility that is both contextual and real?

Led by Senior Manager for Corporate Social Responsibility Kathleen Bannan, who began her presentation by saying “CSR is everybody’s business,” the day-long event proved both thought-provoking (how does a company who doesn’t enjoy corporate America’s most favorable retention rates or the public’s uniform love tackle responsibility and that ever-amorphous doing the right thing?) and insightful (McDonald’s is among very few companies to institute an employee resource group for its white male workforce).

What happened today, however, was an effort at cautious transparency and an attempt at crowd sourcing corporate social responsibility.

The questions were introspective:

And the answers, alternatively useful, creative and critical.

But then I saw this: 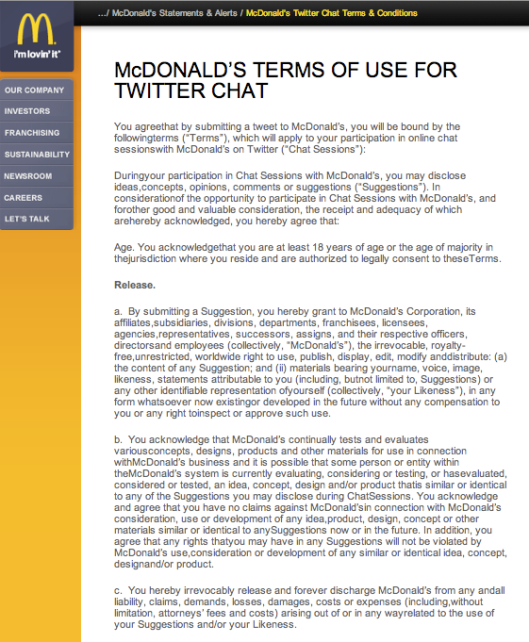 Now McDonald’s is not the first company to host a Twitter chat by any means. I have personally attended several as well as hosted a few — including one coming up next week with UPS’ Chief Sustainability Officer Scott Wicker — with varying levels of participation from a usually diverse set of activists, journalists, executives and consumers.

An indication of things to come or…?