When two adversaries decide to cut across their divides to work together toward a bigger cause, 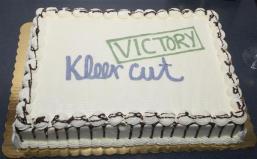 chances are there’s a story – or two – to be told, learned from and examined for replicable tips.

What emerged from a series of meetings that followed that initial, tense meet up was a collaborative framework that has shifted K-C’s sourcing standards and helped offer both

organizations a tangible way to move forward on protecting and conserving forests worldwide.

Today, K-C reports a significant increase in its FSC-certified fiber use and notes higher sales across its Kleenex and Scott tissue brands.

Marking their “wood” anniversary, K-C’s Sustainability Strategy Leader Peggy Ward along with Greenpeace’s Richard Brooks and Rolf Skar, decided to participate in a live Twitter chat facilitated by TriplePundit’s Nick Aster and me on August 5, 2014.

The questions were flying in even before we started keeping the panelists busy through the hour and more: from a behind-the-scenes story about how the two began collaborating five years ago to the future of alternative fibers and how the organizations are working on connecting consumers with sustainability, we covered a lot of ground.

Here are the stats: http://www.tweetbinder.com/rs/db6u3eRDv67

For highlights, grab the #Storify version. And to also grab our audience’s perspectives, search for #ForestSolutions on Twitter!